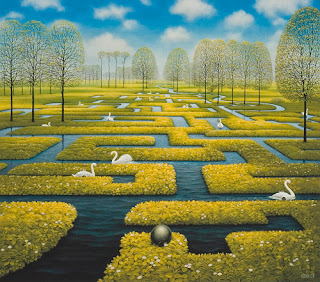 I probably run more games for people who have never played a RPG before in their lives than I do for any other type of group, these days, and I’ve found that one of the big stumbling blocks people can have is a sort of overloading-from-the-unknown. Roleplaying is an unnatural enough activity that people’s brains easily overheat with the uncertainty of how everything is supposed to work, and even extremely simple rulesets can be extremely hard to remember.

In an attempt to mitigate this somewhat, I usually start off sessions for new players with this extremely simple rules explanation: “The only mechanic is that you try to imagine what your character would do in this situation, and then you say what they do. If what would happen is obvious, it happens. If it’s uncertain, then I’ll tell you to roll a die and get a certain number or higher in order to succeed. Depending on what the die roll represents, there might be game mechanics that tell the GM what die size/target number to pick, but otherwise you just ask yourself ‘on a scale from 1-10, how likely is this to go wrong?’ and then try to roll over that number on a d10.”

I really like that “on a scale from 1-10” rule. It’s easy to visualize, pretty easy to be fair with, and really gets to the heart of what RPGs are to me--simulating an interesting situation and seeing what kinds of trouble you can get into inside of it. It’s flexible--it works just as well for player-driven actions (“I try to hack the computer”) as it does for stuff beyond player control (“What are the odds it’s raining today?). You can use it as a binary answer (“below is a failure, above is a success”) or as a sort of gradient of results (“on a 1, the worst thing I can think of happens, on a 10 the best thing I can think of happens”). It just lets the dice jump into the game, insert some chaos, and duck out again as elegantly as possible.

I figure most GMs already do this, to some extent or another. I think it’s useful to label it as a formal mechanic, though.

Here’s my take on a core resolution system that tries to hew as close to that core “on a scale from 1-10” system as possible.

Setting Difficulty: Whenever a character tries to do something, decide how likely it is that something would go wrong if an ‘ordinary’ person tried to do that thing on a scale from 1-10. 1 means automatic success, 10 means near-certain failure. They then roll a d10--if they get that number or higher they succeed, otherwise they fail.

Skills: Every character has a list of things they’re good at. These could be anything from “Athletics” to “Smelling out Lies” to “Nursing Small Animals Back To Health”. If they have an even loosely relevant skill they roll the d10 twice and choose the result to use. If they have an extremely relevant skill they roll the d10 three times and pick the result. Freshly made characters should probably have 4-6 skills.

Appropriate Skills: The one-reroll bonus should be given if the character has any skills that are relevant and helpful to what they’re doing, even if the skill is very specific.

“Athletics” would give 1 reroll to any checks involving running, climbing, swimming, etc. This is a pretty common RPG skill and works more or less as you’ve probably seen before.

“Nursing Small Animals Back To Health” would give 1 reroll in situations where the character is using skills related to nursing small animals--treating simple wounds (even of humans) or illnesses, earning the trust of animals, calming animals & people down with tone & body language, cooking simple but nutritious meals. It would give 2 rerolls when nursing a small animal back to health.

Extra-specific skills, like the nursing animals one, often live in between multiple other more generic skills (in this case, medicine, animal handling, diplomacy, cooking). When deciding if one of these is relevant to a situation, try to imagine when it wouldn’t be useful. “Nursing Small Animals Back To Health” would give no bonus to--advanced medical procedures like surgery, giving orders to or intimidating animals or people, cooking tasty or impressive meals.

Encourage Specific Skills: Note that, even with these restrictions, the hyper-specific skill covers as many 1-die situations (if not more) as the general skill, and also gives a 2-die bonus in some limited situations. This is good and intended--players are encouraged to go specific and creative. It adds more flavor to the character and is just generally all-around more interesting.

“Pole Vaulting” should give a 1-die bonus to basically the same situations “Athletics” does, but also can occasionally grant a 2-die bonus and also says way more about the character.

Ultra-Broad Skills: Skills that are too broad can be rejected by the GM. “Good At Everything” is not a valid skill. If it’s hard to imagine situations where a skill couldn’t be used (“Lucky”, “Doing Things While Angry” when the player gets to decide if the character is angry or not), or if it’s too easy to call on the skill (“Being In A Dungeon” in a dungeon crawling game), it should be limited. If you’ve played other RPGs, you should have a good sense of what a good level of specificity is for a skill. A game that uses this system should include lots of examples.

Skills Don’t Stack: If you have two skills that are both relevant to a roll, you only benefit from one of them.

Analogue Rolls: Die checks don’t strictly need a difficulty rating, based on the situation. The GM should feel free to come up with a range of possible outcomes to a player’s action, loosely assign each to a number, and then use the player’s roll to determine which happens. The player should be able to gain and use rerolls as usual.

I.e.-A reaction roll on running into an orc in a dungeon. On a 1-2 the orc attacks outright, 3-4 the orc demands gold and attacks if not paid, 5-6 the orc demands to know why the players are here, 7-8 the orc doesn’t care about the players, 9-10 the orc has a problem and thinks the players might be able to help.

Relevant And Helpful: Players should only get extra dice to roll when using a skill that is both relevant and helpful. If a player recites a poem while attempting to lift a heavy object, they don’t get an extra roll just from having the “Poetry” skill. Additionally, remember that difficulty levels are set based on how player’s description of their actions--a player who attempts to do a backflip in order to convince the king to spare the life of a prisoner may or may not get their die bonus for their “Doing Backflips” skill, but in either case they are likely to have a much higher difficulty number to hit than a player who appealed to the king’s sense of mercy instead.

Stats: Each character starts with one or two ‘stats’--extremely broad skills that are going to be relevant to huge swathes of rolls. These might be the types of physical or mental traits that are normally stats in a RPG--“Strong”, “Quick”, “Charming”, “Smart”, or could be more like personality traits--“Methodical”, “Death-Defying”, “Cowardly”. When rolling, a PC can get one extra die to roll if they have a relevant stat (beyond what they get from their normal skills). This makes PCs a good deal stronger (a player doing something they’re good at is likely to be rolling 3-4 dice instead of 2-3), and may be appropriate for more heroic games.

Legendary Skills: Some skills can be marked as ‘legendary’, and grant +1 die when invoked. This allows for a bit more growth in PC ability as they gain levels--getting even better at what they’re already good at--, instead of purely growing ‘sideways’ by gaining new skills.