By far the most useful RPG tool I’ve ever made for myself is the d666 table.

I think it’s important, when creating a setting, to think about the core concepts that are important to it. There should be certain recurring themes/aesthetics/archetypes that run throughout the setting, and that you can play with while designing content for the game.

Maybe you want betrayal to be a big part of your campaign. Then, as you’re making all the various locations/factions/etc in the setting, you can think about how each of them relate to the concept of betrayal and how it shapes them. One NPC is hated by one faction and loved by another because they betrayed the first to save the second. Another NPC is on thin ice with their faction because they lapsed in the past, but are in the process of gaining forgiveness. A major monster NPC in the dungeon will try to get the PCs to betray their patrons in exchange for power. Hirelings employed by the PCs get seduced into betraying them by their enemies. Each time the players deal with any of these, what they do also changes their relationship just a touch towards all those other instances. It makes the setting feel more coherent, and makes the choices players make feel just a bit more weighty and interesting.

The issue that I run into when designing content for my games is that, when writing up ideas relating to a theme, it’s really easy to go for the low hanging fruit or end up in a rut. Especially if I’m being put on the spot, if I’m being asked to imagine betrayal stories it’s really easy for me to fall into one of a few cliches that come naturally to me. If you ask me to do this multiple times, it’s probably going to start looking repetitive.

The solution I’ve found is to offload a big part of the creative process into a giant table of concepts and then roll on it three times.

Whenever I start a new RPG project, once I’m done sketching out the big picture stuff I make myself a d666 table to use for inspiration for when I get down to writing up actual content.

d66 tables are fairly common in the RPG world, but if you haven’t seen one before here’s a quick summary:

A d66 table would be a table set on a 6x6 grid. To use it you roll two six sided dice--the first determines what column you read from, while the second determines the row.

A d666 table is basically just six of these tables back to back. So, the first die might determine the table, the second the column, and the third the row. Exactly how you lay it out is up to you.

How to structure it

A d66 table gives you 36 possible results, while a d666 one gives you 216. I generally prefer d666 for larger projects, but the idea of just whipping up 216 concepts back to back is impractical. That’s fine, though, because one great thing about d666 tables is how easy they are to structure.

Instead of just throwing 216 unstructured concepts into a table, I suggest grouping them by type. I’ll typically make all the entries in a column or mega-row have something in common with each other. Specifically, I’ll divide the setting up into six different factions and thematically link everything in a column to one faction. Then I chop up the six mega-rows into categories.

On my current project, I use the following categories:

Sub-Factions: the various types of members a faction might have (merchants, soldiers, nobility)

Personality Traits: some of the types of personalities you’re more likely to run into when dealing with the faction

Desires: what types of things the faction wants and what their motivations are

Ways They Can Hurt You: a list of common ways they can make life hard for the players

Themes: just various imagery and concepts that you want to crop up repeatedly in the setting, especially associated with this faction

This suddenly means that, instead of needing to think up 216 ideas from scratch, you just need to think of six ways that, say, goblins can fuck you over, or six things that the ice witches want. It basically fills itself out.

How I use it in practice

Cool, so now we have a gigantic table of concepts for our setting. How do we actually use it?

It’s really simple--whenever I need to think up something cool (what’s in a hex, what type of treasure is in this room, what’s this NPC’s deal) I just roll on the table two or three times and use that as a starting point. Typically, if I already know the role a thing is going to need to fill I’ll roll twice (I know this room of the dungeon needs a monster or a trap in it), or three times if I’m coming in without an agenda (filling in a block of a hex map).

The amazing thing is, this really works. I initially started doing it as a way to come up with ideas when I was running dry, but I’ve found that the stuff I come up with when I use it is just wildly more imaginative than what I write from scratch.

Let’s look at some examples of results I’ve gotten recently, stocking rooms for a demon-haunted gatehouse guarding the valley of a long-extinct civilization:

Clothes, Demand Vow: This was for the lobby of the gatehouse, an area that anybody entering the valley would need to pass through. I decided that outsiders visiting the valley would be required to wear a sash that marked them as visitors, but that allowed them to understand and speak the local language. The sashes emerge from a great metal cylinder, within which sleeps the gigantic spider engineered to spin these sashes. As long as the spider is left inside, taken sashes will be replaced after a few days, but if the top of the cylinder is opened the spider will rampage.

Abominations, Song: Used to fill a room in the upper floors of the gatehouse. The initial idea was to have some sort of horrible but immobile creature stuck in this room, guarding some treasure, with an enchanting song that could put any who enter the room to sleep. This eventually evolved into the idea of The Shrike, a small and innocuous-looking songbird with a hypnotizing siren song and the ability to use wood magic to imprison a complacent victim in the side of a tree to be devoured at its leisure.

Friendly, Revolution: I decided that this meant an imp who would try to corrupt the players by offering them an enchanted item--a magical dagger that forces its victims to save-or-die, but only when used against a direct superior.

Hedonists, Bullying, Animal Companion: A group of goblins have captured a magical boar and are using it to put on a little colosseum-style arena battle. The goblins have made a little arena out of furniture and are jumping into the ring one by one to battle the boar while others throw insults and rocks. This results in a lot of dead goblins, which the surviving goblins find hilarious.

Some tips on using this effectively

These work best when used as loose inspiration rather than as hard requirements, but at the same time I encourage anybody using them to give an earnest attempt to use any result you get--a lot of my favorite results have come from combos that I initially had no idea how to reconcile. That said, I will frequently reroll if a result seems like a bad fit for the specific prompt I’m currently working on--I’ll just keep it in my back pocket for a few prompts.

It’s also a good idea to have a skeleton framework of your setting already set up. If you already have a bunch of facts laid out about your setting that you want to find ways to show off to the players, you’ll find tons of opportunities to do so as you’re interpreting these.

For example, I already had established that the ancients used spiders for manufacturing, so when I got a ‘clothes’ result it seemed like a great chance to bring a spider into the mix. I already knew that goblins, being low-grade demons, have negative survival instincts, so they seemed like ideal candidates to bully an animal in as inefficient a way as possible. Demons are all about turning civilization against itself, so a dagger that encourages violent revolution seems like a natural gift one could give.

Here’s the whole chart from the example above. The setting is slightly on the backburner as I try to think through how to safeguard a fantasy adventure game all about ‘discovering’ a treasure-filled valley full of vying factions from just turning into colonialism-apologia (more on that later, I’m sure). 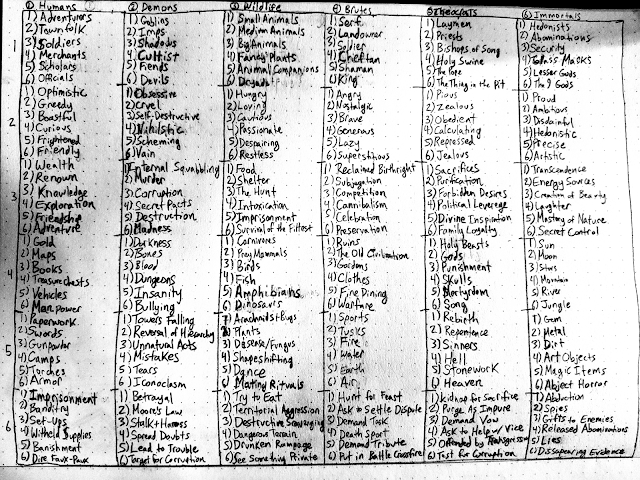